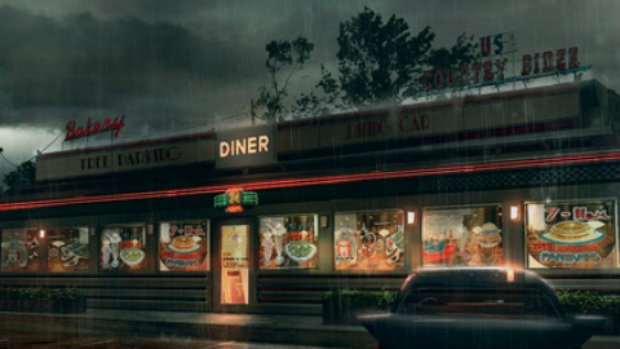 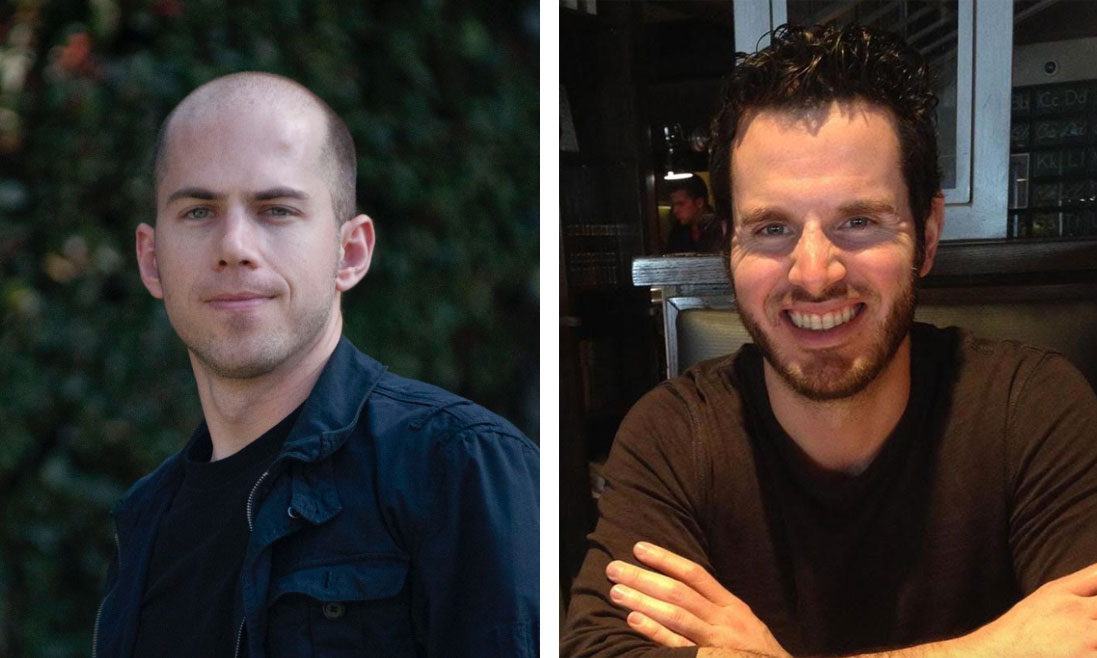 Michael Sherman  & Steve Desmond are multi-BloodList Alum and recently sold their spec HARRY’S ALL NIGHT HAMBURGERS in a bidding war to Warner Bros!

We asked them some questions about their screenwriting career so far, and what led them to selling a spec to a studio.

What do you like about writing, and how long have you been writing?

S: I love creating something for an audience, and writing is one big way to do that. It’s both the process of creating and sharing that’s exhilarating to me. I’ve been into writing since the third grade. The first time my teacher had us write something (she called it a “writing workshop”), the entire process just felt right to me. I wasn’t particularly talented at it, but I loved doing it immediately. You know when you try a new sport or a new activity and it just ‘feels right’ to you? That’s how writing felt to me. Even though I sucked at it for many years, I always had a blast doing it.

M: I’ve always been excited about storytelling and going to far off places through my imagination. I started playing pen and paper role playing games when I was in my early teens. This entailed lots of on-the-fly storytelling, mainly with my brother, though very little of it ever got written down.

I actually had a long road to formal creative writing because I was always told when I was growing up that I was much better at science than anything else. So that’s where I focused my attention and never thought I could be a storyteller. However, in college, I began to collaborate with others, one of whom was Steve, and realized that I had a place in the creative world. From there, it took many years to learn our craft, and even after all this time, I still feel like I am learning new things about storytelling every day.


What got you into horror?

S: As a kid, I was not allowed to watch rated R movies. As such, I spent a lot of time in the horror movie section of the video store (remember those?), because it felt so forbidden. I wasn’t allowed to watch them, I could only look at the amazing cover art. I then convinced my parents to let me rent one R-rated film every year on Halloween. This was a big deal to me and a big choice to make. I remember the first one I chose was A Nightmare on Elm Street 4: The Dream Master, simply because I liked the cover art the most. I don’t remember whether I even liked the movie or not. I just loved that I was watching something that felt like it was meant for people older than me. My interest in horror started right there and has grown steadily ever since. What got me into horror in a much deeper way was many years later with The Silence of the Lambs. Some people would claim that’s not a horror film, but I respectfully disagree. That film showed me that you could scare the hell out of people while still having a compelling story with very layered characters and a lot of emotion. That’s the type of horror stories that Michael and I try to write.

M: I have always been enraptured with movies because they take you into another world and make you feel emotions that you wouldn’t otherwise experience. I feel that horror films and thrillers have an innate way of getting your blood pumping and senses tingling without ever leaving the theater. That’s what I love about them and why I keep coming back for more.


How did you both meet, and what’s it like to be part of a writing team?

S: We met while we were undergrads at USC Film School. Michael and I had very similar but not identical tastes, which I think is a good thing. But we did share the same belief that we wanted to make entertaining movies for audiences, first and foremost, regardless of what genre they lived in. We also shared the same work ethic, which is what I think has kept us working together for so long. We know that we will both always give 100% and put in very long hours to make something as good as possible. We first worked together when we co-wrote a USC thesis film that I directed, and then began writing features around graduation.

All writing teams are different. In our case, when we’re beginning a new project, we create a very thorough outline together that will be between 15 and 30 pages. Then one of us ‘takes lead’ and begins writing, sending increments of 10-20 pages to the other, who will then do a revision pass on them. We’ll trade back and forth as we progress forward, with one person staying a sequence or two ahead in the story until we hit the end. We’ll repeat this over several drafts while sharing it with a few trusted readers for feedback. That feedback is always the most valuable part.

M: The key for us is to try and do this with two or more projects at the same time, with each of us focusing the majority of our time on one project, while we continue to trade them back and forth with each other.

How many scripts have you written?

S: We actually counted this recently. Harry’s All-Night Hamburgers was our 17th feature script, and if you include the five pilots we’ve also written, it was our 22nd overall script. The first one we made any money on was our 12th script. To anyone reading this, if you’re struggling through script one or even script ten, don’t worry. It’s all perfectly normal. The key for me has been to learn to truly love the process of writing, and don’t let your happiness depend on the result.

M: It’s worth saying that we learned a lot from every single script that we wrote. I don’t think any of them were a waste of time. I’m certain that we wouldn’t have been capable of cracking the story for Harry’s without all of the scripts that came before it.

What was the process for your script HARRY’S ALL NIGHT HAMBURGERS, your spec script which recently sold in a bidding war to Warner Bros?!

S: In one word – surreal. We had sold scripts before and been hired for assignments, but this was on another level entirely. Our agents sent the script out on a Tuesday. By Wednesday night, five production companies were sending it into their respective film studios. On Friday morning, we received our first studio offer and there would be two additional studio offers by the end of the day, until Warner Bros eventually won out. Michael and I basically let our agents and attorney handle all of this as we tried to stay calm and focus on other projects. Fortunately, we were busy prepping for a TV pitch that week, which kept us distracted. We closed the deal with Warner Bros by Friday night. All in all, it was four days from the time our script went out until it was sold. To put that into context, the first script we sold was on the market for 11 months before it found a home.

M: In a lot of ways, we had very little to do with the process of selling the script. Our job was to deliver a great screenplay, and then we put it in the hands of our reps at APA and Ziffren. We have a fantastic team who we trust completely to get the job done for us. So basically, all we had to do was wait once the train got rolling. It was a great experience and definitely makes it feel like the years and years of hard work that came before it were worth it.

What was the process of you gaining representation?

S: In every case, through a referral. We found our first manager after a friend of ours who was an intern at an agency passed our script along to an assistant at a management company, who gave it to his boss, who brought us in. We found our current agents after a friend of ours named Devin Andre, who is a great executive and film producer, passed a script of ours along to Adam Perry at APA, who took a shot on us. That script, On Your Doorstep, wound up on the BloodList later that year.

What’s next on your agenda?

S: We’re adapting a horror novel for FilmNation. We’re writing a sci-fi pilot with Global Road Television (formerly known as IM Global TV). We’re developing a sci-fi horror feature based on a really cool video game with Roth-Kirschenbaum Films. We also have another horror feature script that is a loose spin off from our short film Monsters, which we are raising money for to make it as a low budget film.

M: Not to mention trying to finish up our own sci-fi adventure novel and pushing forward several other spec scripts of ours in the film and TV spaces. Time is becoming the main limiting factor.

What’s a Film or TV show you’d love to remake?

S: Not a remake per say but would love to take a stab at re-booting A Nightmare on Elm Street.

M: Part of me thinks The Last Starfighter could be cool in the present…

Who is your favorite movie villain?

What is your favorite Film / TV show of the year?

S: I’m going to include 2017 into this as it’s still early in 2018. My favorite movie of last year was Dunkirk and favorite TV show was Game of Thrones (obviously…). My favorite film of 2018 thus far is Black Panther.

M: Just to laundry list a few going back a bit, loved Dunkirk, Three Billboards, I Tonya, Game of Thrones, Wind River, Arrival, Hell or High Water, Deadpool, Sully, and so on…

What is your dream project?

M: Obviously Zelda. Metroid wouldn’t be too shabby either.

You have been on the annual BloodList twice (congrats!), we would love to know what the experience was like!

S: The 2013 BloodList was one of the first times that our work was recognized by an industry audience. It led to that script, On Your Doorstep, getting optioned and set up. It was also a big career boost to have our script, Orb, get voted #1 on the 2016 BloodList. We find that people really pay attention to the BloodList because it’s genre specific and has a great track record of produced films. It’s definitely made a difference in our career and we’re very thankful for it.